The best club teams in the country were in Kelowna, BC for the Travelers Curling Club Championship.

In the men’s event, Saskatchewan and Ontario each won their round-robin pools with perfect 6-0 records to move directly in the semi-finals.  Manitoba qualified for the semi-finals by defeating Nova Scotia 7-5 in the quarterfinals while BC defeated Manitoba 7-1.  In one semi-final, Saskatchewan scored the only deuce of the game in the 3rd end then scored the winning point in the last end for a 4-3 victory over Alberta.  In the other semi-final, Ontario scored two points in the 1st, 5th and 7th ends while holding BC to single points in the 3rd and 6th ends for a 6-2 victory.

In the Championship Final, Ontario stole two points in the 2nd and another two points in the 6th end which made the difference in their 6-3 victory over Saskatchewan.  In the bronze medal game, Alberta took an early 3-0 lead and never let BC get into the game as they won 7-1. 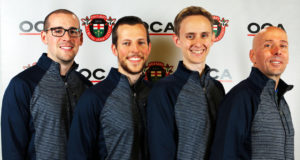 In the women’s event, Alberta with a record of 5-1 and Manitoba with a record of 4-2 won their pools and qualified directly into the semi-finals.  They were joined by Ontario which defeated Newfoundland & Labrador 6-3 in one quarterfinal while Quebec defeated Nova Scotia in the other quarterfinal by a score of 9-4.  Alberta took control of their semi-final against Ontario when they scored three points in the 5th end then stole three more points in the 6th end on their way to a 7-1 victory.  In the other semi-final, Manitoba was behind Quebec 5-4 in the 7th end when they scored two points to take a 6-5 lead then stole two points in the 8th end for an 8-5 victory.

In the Championship Final, Manitoba went into the last end down by a score of 5-4 after giving up a steal of one in the 7th end but scored four points in the 8th end for an 8-5 victory over Alberta.  In the bronze medal game, Quebec scored two points the first two times they had the hammer which helped propel them to a 6-3 victory over Ontario. 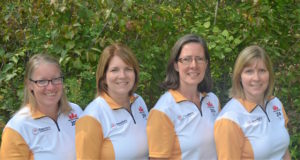 The 2017 Travelers Curling Club Championship will be played Nov. 20-25 of next year at the Cataraqui Golf and Country Club in Kingston (ON), home club of this year’s men’s champions.