Many of Europe’s top teams were in Braehead, Scotland last week for the 2016 Le Gruyere European Curling Championships.   In all, 26 men’s teams and 20 women’s teams were in Perth to compete in both the Group A and Group B events.

Among the favourites in the men’s event were two-time defending men’s champions Sweden, Norway, Switzerland and the hosts from Scotland.  Sweden, represented by Team Edin, were looking to win their third consecutive European Championship while Norway entered the event with 10 consecutive podium finishes, all of them by Team Ulsrud.  Meanwhile, Scotland was looking for its first European Championship victory in the men’s event since 2008 and their first on home soil since 1988.   In Group B, two of the teams that people were watching were the Netherlands and the Czech Republic.  Team van Dorp of the Netherlands won an event on the World Curling Tour this season while Team Kubeska of the Czech Republic had recently won the Edinburgh International in Scotland against a strong field.

Although there were some upsets during the round-robin, most of the favourites in the men’s event made it to the playoffs.  Sweden finished atop the round-robin standings with an 8-1 record while Norway, Switzerland and Russia all made the playoffs with identical 6-3 records.  The hosts from Scotland failed to make the playoffs when they lost their last game to Russia, giving up a steal of two points in the last end.

In the semi-finals, Sweden and Russia were locked into a tight game until the Swedes stole two points in the 6th end to take a 6-2 lead and they were in control the rest of the way, winning by a score of 8-5.  In the other semi-final, Norway took an early 4-0 lead after two ends and were up by as much as 6-1 in a game that finished 7-4.  The win guaranteed that Team Ulsrud of Norway would win a medal at the European Championships for a 11th consecutive year.

In the bronze medal game, Switzerland defeated Russia 8-6 while the Netherlands defeated Austria two games to one in the “World Challenge” and earned the 8th and final European spot at 2017 World Championships.

In the final, Sweden took a 3-1 lead into the 5th end break only to see Norway score two points in the 6th end to tie the game at 3-3.  Sweden than took a 5-3 lead in the 9th end but Norway came right back with two points of their own in the 10th to tie the game at 5-5.  In the extra-end, Niklas Edin made a draw to the back of the four-foot for one point and a third consecutive European Championships for Team Edin and Sweden. 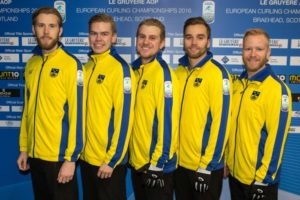 The women’s event was expected to come down to a battle between Scotland, Sweden and Switzerland with each country represented by teams in the top 20 in the world rankings.  Team Muirhead has represented Scotland at the Europeans each year since 2008 and have been on the podium each year since 2010.  Meanwhile, Team Hasselborg of Sweden were playing in their first Europeans but have had a strong season with two victories and semi-final appearances at both Grand Slam events this season.  Team Feltscher of Switzerland, the 2016 World Champions, were looking to win their second European Championship after winning on home soil in 2014.  Another team that many were watching was Team Moiseeva of Russia who upset Team Sidorova in the Russian playdowns to qualify for the Europeans where Team Sidorova was hoping to defend their title they had won in 2015.

The round-robin went mostly according to form with Scotland finishing atop that standings at 9-0 while Sweden was second at 8-1.  The Czech Republic surprised some by qualifying for the playoffs with a record of 6-3 but Team Kubeskova has had some quietly solid results on the Curling Champions Tour in Europe this season.  The final playoff position was secured by Russia who also finished at 6-3 while Switzerland were never able to win two consecutive games and finished the round-robin at 4-5.

In the bronze medal game, Team Muirhead of Scotland won a medal at the European Championships for a seventh straight year by defeating the Czech Republic 6-2.  Meanwhile, Italy defeated Hungary two games to none in the “World Challenge” for the final European spot at the 2017 World Championships.

In the final, Sweden took an early 3-1 lead but Russia tied the game with a point in the 5th and a steal of one in the 6th end.  The teams exchanged single points in the 8th and 9th to tie the score at 4-4 heading into the 10th end with Sweden having the hammer.  Anna Hasselborg had a draw with her final rock but wrecked on a guard allowing the Russians to steal two points and win the 2016 Le Gruyere European Curling Championships.  It is a first European title for Team Moiseeva but a second consecutive title for Russia and their fourth title since 2006.  It is an impressive achievement for Team Moiseeva, the 124th ranked team in the would entering the European Championships, who defeated two top-ten teams in the playoffs. 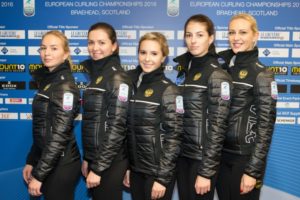 (All photos courtesy of the World Curling Federation)