The holidays are a time for family and we thought it would be appropriate to do a feature on one of the more successful curling families in From The Hack‘s home region of Northern Ontario. 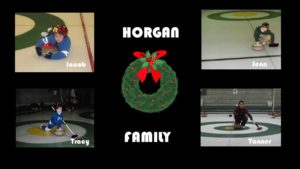 For the Horgan family of Sudbury, curling has always been a family affair.  Tracy (Fleury) and Jennifer (Wylie) are the Skip and Third for the 12th ranked women’s team in the world while their brothers Tanner and Jacob are the Skip and Third of a junior team that made the final of the 2016 Canadian Junior Championships, a team that is ranked 63rd in the world despite playing a limited men’s schedule and recently competed in their first Grand Slam of Curling event.  All four siblings have been coached by their father Gerry who still coaches his two sons.  As for Gerry’s wife Kathy, as you’ll here in our interview with Robin Wilson of the Sandra Schmirler Foundation, she never hesitates to lend a hand for a good cause when she can.

From The Hack recently interviewed Gerry, Jenn, Tracy, Tanner and Jacob to talk curling and about being a curling family: