The Boost National was the third event in the 2016-17 Pinty’s Grand Slam of Curling and was held in Sault Ste Marie, Ontario.

The Men’s Final between Team Jacobs and Team Carruthers was a well-played game that saw neither team give their opposition much to work with.  The game took a turn in the 6th end when Team Jacobs stole a point to take a 3-2 lead.  Team Carruthers blanked the 7th end only to see Team Jacobs steal another point in 8th for a 4-2 victory in front of a home crowd in Sault Ste Marie.  It was a second title for Team Jacobs this season and a first Grand Slam title since the 2015 Players Championship in Toronto. 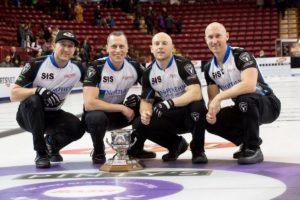 Brad Jacobs spoke with From The Hack to discuss his team’s second career Grand Slam victory:

In the women’s final against Team Tirinzoni of Switzerland, Team Einarson took a 3-2 lead in the 5th end by stealing a point against Tirinzoni and forced the Swiss rink to take a single point in the 6th to tie the game at 3-3.  In the 7th end, Silvana Tirinzoni missed a double takeout with her final rock allowing Kerri Einarson to draw for two points and a 5-3 lead.  The 2016 Manitoba champions then ran the Swiss out of rocks in the 8th end for their first ever Tier 1 Grand Slam title and their first title of the year on the World Curling Tour.  It has been quite a turnaround for Team Einarson who had failed to qualify for the playoffs in each of their events this season prior to their semi-final appearance at last week’s Canada Cup followed by their victory in Sault Ste Marie at the Boost National. 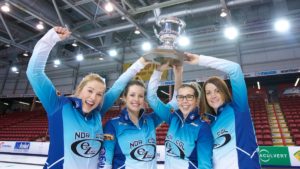 Kerri Einarson spoke with From The Hack to discuss her team’s big win in Sault Ste Marie: