The Kariruzawa International in Japan attracted several teams that competed in the most recent Grand Slam of Curling event.  Among the pre-event favourites on the men’s side were Team Morris, Team Murdoch, Team Brewster, Team Stjerne and Team Morozumi with the Japanese team joining Brewster as the only two rinks to go undefeated in the round-robin.  In their semi-final, Team Brewster took a 7-4 lead over Team Morris after six ends then held on for a 7-6 victory.  In the other semi-final, Team Murdoch put their game against Team Morozumi away when they stole two points in the 6th end for a 7-2 lead and the victory.

The final was a battle of Scotland with Team Brewster and Team Murdoch engaged in a tightly fought contest that was tied 1-1 after four ends.  In the second half of the final, Team Murdoch took a 3-2 lead in the 6th end only to see Team Brewster blank the 7th and then score two points with the hammer in the last end for the victory.  It was Team Brewster’s first title of the season outside of the Scottish European playdowns. 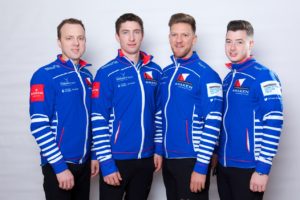 The pre-event favourites among the women included Team Muirhead, Team Sidorova, Team Sweeting, Team Sigfridsson and Team Ogasawara who were the highest ranked Japanese team in the women’s event.  Team Muirhead and Team Gim of Korea earned direct entry in the semi-finals by going undefeated and winning their pools in the round-robin.  In their semi-final, Team Gim had a 3-2 lead over Team Sidorova half way through the game.  The 5th, 6th and 7th ends were blanked with Team Gim stealing a point in the 8th end to win the game 4-2.  The other semi-final saw Team Muirhead and Team Sigdfridsson tied at 5-5 after Team Muirhead scored a single point in the 8th.  In the extra-end, The Swedes took advantage of last rock to score two points and a 7-5 victory.

In the final, Team Gim took a 5-1 lead by scoring three points in the 4th and never looked back as they defeated Team Sigfridsson by a score of 7-4.  It was a first title this season for Team Gim after losing in the final of another Japanese event in August.

In the men’s event at Curl Mesabi in Eveleth, Team Dunstone of Winnipeg, Team Meachem of Regina and Team Shuster of Duluth all ended the round-robin undefeated with each team winning their quarterfinal game.  In one semi-final, Team Dunstone took an early 2-0 lead over Team McCormick by stealing a point in the 2nd end.  The score remained the same until the 7th end when Team McCormick scored two points to tie the game and followed that up by stealing a point in the extra end for the victory.  The other semi-final also went to an extra-end where Team Shuster took advantage of having the hammer to defeat Team Meachem by a score of 4-3, setting up a rematch of the final at an event in Duluth late last month.

In the final, Team Shuster took a 3-1 lead in the first half of the game but Team McCormick came back by scoring two points in the 5th to tie the game and then scored single points in the 7th and 8th ends for the win, their 4th title of the season and their second consecutive victory over Team Shuster in an event final. 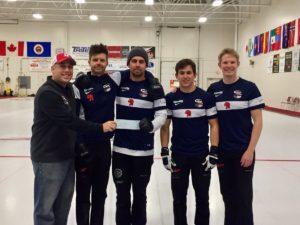 Team Christensen and Team Bear, both based in Blaine (MN), may have finished atop their pools in the round-robin of the women’s event to qualify directly to the semi-finals but it was Team Potter, skipped by 2006 Olympian Cassie Potter, that grabbed the attention of most observers in Eveleth.  Team Potter, came into Curl Mesabi ranked 201st in the world after failing to qualify for the playoffs in any of their three events this season.  Cassie Potter and her rink qualified for the quarterfinals where they defeated Team Sinclair, who will represent the United States at next month’s Continental Cup, and then defeated Team Christensen in the semi-finals by a score of 5-4.  The other semi-final was a match-up between Team Bear and Team Chyz of Edmonton who have quietly gone about winning three titles this season while moving up from 39th to 26th in the world rankings.  Team Bear and Team Chyz were tied 3-3 after six ends when the team from Edmonton scored three points for a 6-3 victory.

In the final, Team Chyz took an early 2-0 lead after stealing a point in the 2nd end.  Team Potter kept the game close and it was 4-2 after six ends when Team Chyz stole two points in the 7th to secure a 6-2 victory and their 4th title of the season. 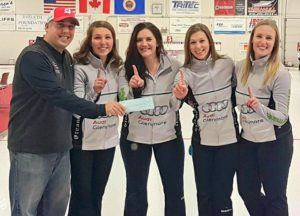 Teams from a total of 11 countries made their way to Qinghai, China with Team Roth of the U.S. and Team Wang of China headlining the women’s event while Team Ulsrud of Norway and Team Liu of China headlined the men’s event.  There were no unbeaten teams in either the men’s or women’s round-robin meaning that the field remained wide-open heading into the playoffs.

In the men’s event, Team Ulsrud defeated Team Eskilsson of Sweden 8-6 by stealing two points in the 9th and running the Swedes out of rocks in the 10th end to win their semi-final game.  Meanwhile, Team Lyburn of Canada defeated Team Brown of the U.S. 6-4 in a tightly played game with no team having more than a one point lead until Team Lyburn scored two points in the 8th end.

In the final, Team Ulsrud broke open a tight 3-2 game by stealing three points in the 8th end on their way to a 6-3 victory over Team Lyburn.  It was the first title of the season for the Norwegian team.

In the women’s event, Team Roth of the U.S. stole single points in the 8th and 9th ends to take a 6-4 lead in their semi-final against Team Fleming but gave up three points to the Scottish team in the 10th end who won the game 7-6.  In the other semi-final, Corryn Brown and her team from Canada stole two points in the 7th end to take a 5-4 lead over Team Jentsch of Germany then scored three more points in the 9th end for an 8-5 victory.

In the final, Team Brown took a 5-2 lead when they scored 4 points in the 5th end then put the game away by scoring three more points in the 7th end on their way to a 9-4 win over Team Fleming. It is the first title of the season for Team Brown that went into the event ranked 90th in the world.