From the Hack interviewed Kristen Streifel who skipped her team of Chantele Broderson, Kate Goodhelpsen and Brenna Bilassy to the Canadian Junior Championships this weekend in Victoria.  Kristen discusses the championship final, who she thought about first when she realized her team had won and how serving as an alternate on Team Rocque at the 2015 World Juniors will help her team as they prepare to represent Canada next month in South Korea. 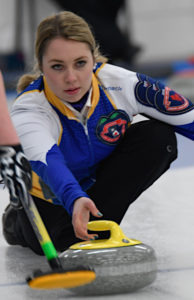