2016 has come and gone, and what a year it was for USA Curling. The start of the year saw Teams Brown & Shuster competing as part of Team North America at the Continental Cup in Las Vegas. Team North America emerged victorious, and both Brown & Shuster went on to represent the United States at their respective World Championships. Brown finished in a respectable sixth place while Shuster brought home a Bronze Medal, the first Men’s Worlds medal for the United States since 2007.

While Brown and Shuster were the dominant US teams throughout much of the 2015-2016 season, the 2016 portion of the 2016-2017 season has seen a changing of the guard of sorts.  The biggest U.S. story in the second half of 2016 has been Team McCormick which was put together over the summer, won four titles on the World Curling Tour and moved from 71st to 30th in the world rankings. Veteran players Heath McCormick and Chris Plys have been joined by 2016 World Junior silver medalists Korey Dropkin and Thomas Howell to form an impressive new rink.  Heath McCormick recently spoke with From the Hack to discuss his team’s season and the upcoming Continental Cup. 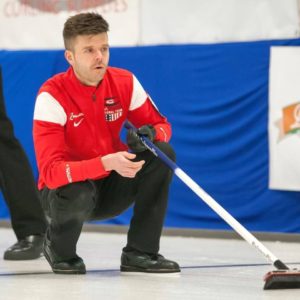 On the women’s side, no team has been able to step up and fill the spot in the Top 20 occupied by Erika Brown and her team last season.  The good news is that Team Roth, Team Christensen and Team Sinclair are evenly matched which should make for a very competitive U.S. Curling Championship in Everett, Washington next month.  In the meantime, Team Sinclair will represent the U.S. on Team North America at the Continental Cup and skip Jamie Sinclair recently joined From the Hack to discuss her team’s season and how much they are looking forward to the Continental Cup.

With only a few events remaining before the US Nationals in early February, the chances are few and far between for teams to earn points and improve their standings This is crucial, as the US uses a system based on both order-of-merit points and world ranking to determine their representative at Worlds. Thus, a team does not necessarily need to win the event to earn the right to represent the US at Worlds, provided they have done well enough on tour that season. Look for a US Nationals preview next month, where we’ll break down all the possible outcomes and scenarios based on this system.