Some of the world’s top curling teams made their way to Las Vegas this week for the 13th Continental Cup of Curling with Team North America looking to win over Team World for the 5th consecutive year.  Team World arguably entered the event as slight favourites based on their play this season.

Team World was led by Team Edin who have been the hottest team on the planet this season and fellow Swedes Team Hasselborg who were called in to replace Team Sidorova of Russia at the event.   The Team World lineup also included Team Ulsrud of Norway, Team Stjerne of Denmark, Team Fujisawa of Japan and 2016 women’s world champions, Team Feltscher of Switzerland.

Team North America was led by Team Koe and Team Jones with the players on both teams having played in multiple Continental Cups.  They were joined by Team Carruthers of Winnipeg and Team Carey of Calgary, the winners of the 2016 Scotties Tournament of Hearts.  The United States was represented by Team McCormick and Team Sinclair of Minnesota.

The event was a race to 30.5 points with the first three days of competition consisting of four-person and mixed doubles play while the final day of competition would include men’s, women’s and mixed Skins games.

Women’s teams from eleven different countries made their way to Bern, Switzerland for the Bernese Ladies Cups.  The field included Team Flaxey of Canada, Team Muirhead of Scotland and Team Tirinzoni of Switzerland who are all ranked in the top ten of the world rankings.  Team Tirinzoni, who won this event last year, and former world champions Team Paetz kept the local crowd happy by both qualifying for the playoffs through the A event.  The other teams to qualify for the playoffs were Team Fleming of Scotland, Team Roth of the United States, Team Wang of China, Team Moiseeva of Russia along with Wrana and Team Sigfridsson of Sweden.

In their semi-final game, Team Tirinzoni and Team Wang played a very tight game that was tied entering the 8th end when the Swiss team scored three points for a 6-3 victory.  In the other semi-final, Team Paetz was ahead 3-2 at the half way point then they scored two points in the 5th and stole a point in the 6th end for a 6-2 victory over Team Moiseeva of Russia.

In the final, Team Paetz took a 2-0 lead in the first end followed by three straight blank ends in the first half of the game.  Team Tirinzoni scored two points of their own in the 5th to tie the game at 2-2 then forced their countrywomen to one point in the 6th but Team Paetz returned the favour by forcing their opponents to a single point in the 7th for a 3-3 tie.  In the 8th end, Team Paetz took advantage of having the hammer and scored one point to win the game and their first title of the season.

It was an important victory for a Team Paetz that has struggled this season, failing to qualify for the playoffs in all but two of their events.  It was also a strong performance by Team Tirinzoni who played “three-legged” in the event as their regular 3rd, Manuela Siegrist, continues to recover from knee surgery. 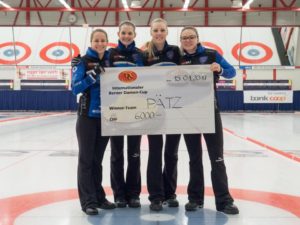 Jean Michel Menard and his team were looking for their fifth consecutive trip to the Tim Hortons Brier at the 2017 WFG Tankard in Levis, Quebec.  However, the 2004 Brier champion struggled early but managed to qualify for the Page playoffs where they met Team Roy of Thurso in the 3 vs 4 game.  Team Menard scored two points in the 2nd end to take a 2-1 lead then stole 2 points in each of the 3rd and 4th and stealing another point in the 6th on their way to 7-2 victory.  In the 1 vs 2 game, Team Ferland of Trois-Rivieres scored two points in each of the even ends on their way to a 10-6 victory over Team Morissette to earn a spot in the provincial final.

In the semi-final, Team Menard took control of the game when they forced Team Morissette to a single point in the 5th end then scored two points in the 6th to take a 5-2 lead.  Team Morissette was unable to generate much offense the rest of the way scoring a single point in the 8th only to see Team Menard put the game away by scoring two points in the 9th end for a 7-3 victory and a trip to the final against Team Ferland.

In the final, the two teams exchanged scores throughout the first half of the game with Team Ferland taking a 5-3 lead by scoring two points in the 5th end.  Team Menard responded by scoring two points of their own in the 6th end followed by a steal of one in the 7th and two more stolen points in the 8th to take an 8-5 lead.  The teams then exchanged single points in the 9th and 10th as Team Menard won 9-6 for their fifth consecutive WFG Tankard and will now represent Quebec at the Tim Hortons Brier in St. John’s, Newfoundland.

Marie-France Larouche and her team entered the 2017 Quebec Scotties Tournament of Hearts looking to repeat as champions.  However, it was Team Belisle of Montreal that finished first in the round robin to gain direct entry into the final.  In the semi-final, Team Larouche took a 4-2 lead over Team Perron by stealing a point in the 8th end.  Team Perron came back strong by scoring two points in the 9th end to tie the game at 4-4.  In the 10th end, Team Larouche took advantage of the hammer to score one point and the victory.

In the final, Team Belisle took an early 3-0 lead and led Team Larouche 5-1 after the fifth end.  After exchanging singles points in the 6th and 7th ends, Team Larouche narrowed the gap to 6-4 in the 8th end.  Team Belisle came with a single point in the 9th and then ran Team Larouche out of rocks in the 10th end for a 7-4 victory.  It will be Eve Belisle’s 3rd time representing Quebec as skip at a Scotties and her first since 2010. 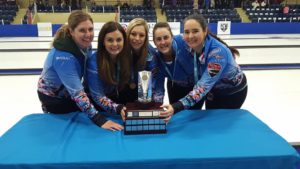 In regional World Curling Tour action this weekend, Team Balderston of Grand Prairie defeated Team Cross of Edmonton to win the Peace Tour Championship in Sexsmith, Alberta.  Meanwhile at the Brandon Men’s Bonspiel, Team Lyburn of Winnipeg defeated Team Irwin of Brandon for their first title of the season.

The Ed Werenich Golden Wrench Classic in Tempe, Arizona has attracted another strong field this headlined by Team McEwen, Team Morris and Team Thomas who are all currently ranked in the top fifteen in the world rankings.  The America contingent in Tempe will include Team McCormick, fresh off their participation in the Continental Cup, along with Team Shuster and Team Brown.

The Curling Champions Tour will be hosting two event in Europe this week.  The men will be in Hamburg for the German Masters.  Teams from 13 countries will be on hand as Team Murdoch of Scotland attempts to defend the title they won last season.  Team Bottcher of Canada, Team Ulsrud of Norway, Team de Cruz of Switzerland, Team Brewster of Scotland and Team Baumann of Germany will be among the teams competing.

The Curling Champions tour will also be hosting the Glynhill Ladies International this week in Glasgow, Scotland.  Team Muirhead of Scotland, Team Wang of China, Team Moiseeva of Russia along with Team Feltscher and Team Paetz of Switzerland will be among teams from 12 countries to challenge defending champions, Team Tirinzoni of Switzerland.

Provincial playdowns continue this week in British Columbia, Northern Ontario and Prince Edward Island.  The BC Women’s Curling Championships will take place in Duncan where Team Thompson of Kamloops will look to defend their title and return to the Scotties against a field that includes Team Gushulak of Vancouver, Team Mallet of Walnut Grove and Team Pewarchuk of Victoria.  In Northern Ontario, Nipigon will host the NOCA Provincial Women’s Championships which will likely come down to another battle between Team Fleury of Sudbury and Team McCarville of Thunder Bay with the winner to represent Northern Ontario at this year’s Scotties.

In PEI, both the men’s and women’s provincial championships will be taking place this week in Summerside. With neither 2016 champion skips (Suzanne Birt, Adam Casey) competing this year look for