At the Viterra Championship in Manitoba, Team McEwen of Winnipeg was hoping to qualify for the Tim Hortons Brier for a second consecutive year. The defending champions got off to a good start by qualifying for the playoffs through the A Event along with Team Carruthers, Team Lyburn and Team Dunstone.  Meanwhile, Team Loreth, Team Gunnlaugson and the teams skipped by brothers Dennis and David Bohn qualified for the playoffs through the B Event.  Once in the playoff round, Team McEwen and Team Carruthers both qualified for the 1 vs 2 game with McEwen defeating Team Dunstone 7-2 and Carruthers defeating Team Lyburn 8-5 by scoring three points in an extra-end.  Neither Lyburn or Dunstone moved on to the 3 vs 4 game as Team Loreth defeated Lyburn 6-5 and Team Gunnlaugson defeated Team Dunstone 5-3.

In the semi-final, Team McEwen scored three points in the 1st end then stole single points in the 3rd, 4th and 5th ends on their way to an 8-2 victory over Team Loreth to set-up a game against Team Carruthers for the Championship.  In the final, Team McEwen stole a point in the 1st  end of the game and were up 4-3 after scoring two points in the 6th.  Team Carruthers pulled ahead by scoring two points of their own in the in the 7th end only to see Mike McEwen make a hit to score four points in the 8th to take an 8-5 lead on their way to an 8-7 victory and a second consecutive trip to the Tim Hortons Brier. 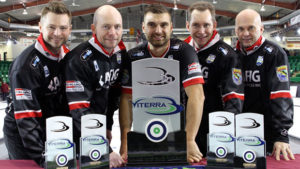 In the Alberta Boston Pizza Cup, Team Bottcher secured the top seed in the playoffs by defeating Team Lizmore 6-5 in the A Event final while stealing the winning point in the 10th end.  Team Lizmore then made it into the B Event final where they lost 10-6 to Team Thomas who scored three points in the last end to break the game open.  In the C Events finals, Team Sluchinski defeated Team Pahl 9-5 and Team Lizmore failed in their 3rd attempt at a playoff spot, losing 7-6 to Team Appelman.

In the 1 vs 2 game, Team Bottcher took an early 5-2 lead over Team Thomas then stole single points in the 6th and 7th ends to take a 7-2 lead on their way to an 8-3 victory.  Team Thomas who would go on to play the winner of the 3 vs 4 game between Team Sluchinski and Team Appelman.  In the 3 vs 4 game, Team Appelman was down 4-2 after four ends but tied the game in the 5th end then seemed to take control of the game by stealing two points in the 6th and another point in the 7th.  Team Sluchinski narrowed the gap to 7-6 by scoring single points in the 8th and 9th ends before Team Appelman scored three in the 10th end for a 10-6 victory.

In the semi-final, Team Appelman took control of the game when they scored four points in the 5th end then stole one in the 6th end to take a 5-2 lead.  Team Thomas managed to narrow the gap to 7-6 but Team Appelman took advantage of having last rock in the 10th end to score one point and an 8-6 upset victory over Team Thomas.

In the final, Team Bottcher took a 3-2 lead when they stole a point in the 6th end then took a 5-3 lead in the 9th end by stealing yet another point.  Team Appelman tied the game with two points in the 10th but Team Bottcher took advantage of last rock in the extra-end to score a point and win their first Albert Boston Pizza Cup. 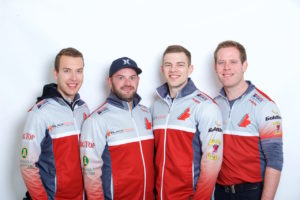 In the semi-final, Team Jackson took a 4-2 lead when they scored three points in the 5th end but Team Joanisse responded in the 6th end by scoring two points to tie the game at four apiece.  The teams continued to battle through the 10th end when Team Joanisse scored one point to tie the game 7-7 and send it to an 11th end where they stole four points for an 11-7 victory over Team Jackson.

In the final, Team Morris got off to a 2-0 by scoring one point in the 2nd and stealing a point in the 3rd end before Team Joanisse tied the score at 2-2 in the 4th.  Team Morris took control of the game when they stole two points in the 6th followed by a steal of one in the 7th to take a 6-2 lead.  Team Joanisse scored one point in the 8th but Team Morris blanked the 9th end then ran Team Joanisse out of rocks in the 10th.  This is the  fourth straight victory at provincials for Jim Cotter, Tyrel Griffith and Rick Sawatsky but their first with John Morris since 2014.

In Northern Ontario, Team Jacobs went undefeated in the round-robin to earn a spot in the final where they would play the winner of the semi-final between Team Johnston of Thunder Bay and Team Glibota of Sudbury who finished the round-robin at 5-2 and 4-3 respectively.  In the semi-final, the two teams exchanged single points over the first four ends then deuces in the 5th end 6th ends tying the game 4-4 after six ends.  A three-ender by Team Johnston in the 8th end was sandwiched by Team Glibota’s single point in the 7th and two points in the 9th to tie the game 7-7 entering the 10th.  Team Johnston took advantage of the hammer to score one point in the 11th to earn a spot in the final where they would meet Team Jacobs. 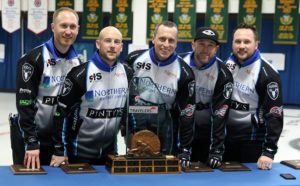 Defending champions Team Kennedy earned the top seed in the playoffs at the New Brunswick Pepsi Tankard by going undefeated in the round-robin, finishing 7-0.  Teams Grattan, Roach and Sullivan finished tied for 2nd at 4-3 with Team Sullivan earning the 2nd seed in the playoffs.  That left Team Roach and Team Grattan to play in a tie-breaker that Team Grattan won 8-1 while stealing a total of five points during the game.  Team Sullivan took control of the semi-final when they scored four points in the 5th end to take a 6-2 lead. Team Grattan came as close as 7-6 but Team Sullivan held for an 8-6 victory to earn a trip to the final against Team Kennedy.

In the final, Team Sullivan took a 4-1 lead after four ends but then Team Kennedy scored one in the 6th then stole a point in the 8th and three more in the 9th to defend their provincial championship by a score of 7-4. 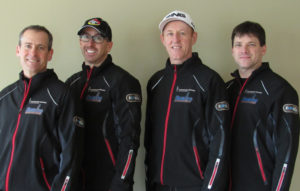 The Scotties Tournament of Hearts technically starts on Thursday when New Brunswick (Adams), the Northwest Territories (Galusha), Nunavut (Chislett) and the Yukon (Koltun) compete in the Scotties pre-qualifier event for the final spot in the main draw.  Last year, the Northwest Territories lost in the final of the Pre-Qualifier for the second year in a row, this time to British Columbia who went to finish 2-9 to avoid relegation.  For information on these teams including interviews with the skips, click here

The U.S. National Curling Championships started on the weekend, following is a link to the preview we posted on From the Hack prior to the start of the championship.  Click here

The Swiss Curling Championships for both men and women are taking place in Flims this week.  Team Feltscher are the hometown favourites in the women’s event but will face stiff challenges from Team Tirinzoni and Team Paetz.  The men’s event will likely come down to a battle between Team de Cruz and Team Pfister.