The United States National Championships took place in Everett, Washington last week.  It was the first time the Nationals returned to the state of Washington since the 1997 event was hosted in Seattle.

In the U.S. Men’s National Championships, six of the skips were previous champions including Brady Clark and his team who won the 2016 Nationals in Jacksonville, Florida.  Team Shuster, the 2015 champions, dominated the round-robin finishing undefeated at 9-0 to earn the top seed in the playoffs and a spot in the 1 vs 2 game.  The defending champions, Team Clark of Seattle, finished 7-2 in the round-robin to place second while Team Birr of Minnesota finished 3rd in the round-robin at 6-3.  Former champions Pete Fenson and Craig Brown led their teams to 5-4 records and met in a tie-breaker to see who would play Team Birr in the 3 vs 4 game and a spot in the semi-final.  In the tie-breaker, Team Brown scored two points in the 9th end to take a 5-4 lead then stole a point in the 10th for a 6-4 win.

In the 1 vs 2 game, Team Shuster and Team Clark exchanged deuces early in the game and went into the 10th end tied at 4-4.  In the 10th end, Team Shuster scored two points for a 6-4 victory and a spot in the final while Team Clark would play in the semi-final.  The 3 vs 4 game saw Team Brown jump out to a 3-0 lead only to see Team Birr steal two points in both the 5th and 6th ends to take a 5-3 lead.  Team Brown scored a single point in the 7th and stole a point in the 8th to tie the score at 5-5.  The teams then exchanged single points late in the game until Team Birr took advantage of the hammer in the extra-end for a 7-6 victory.

In the semi-final, Team Birr took a 5-3 lead when they scored three points in the 4th end then took control of the game for good in the 7th end when they scored two points to take a 7-4 lead on their way to an 8-5 victory and a spot in the final where Todd Birr would look to win his first national championship since 2007.

The final seemed to be headed for an upset when Team Birr scored four points in the 4th end to take a 5-2 lead.  However, Team Shuster responded immediately with two points of their own in the 5th end to keep the game close.  In the 7th end, trailing by two, Team Shuster scored three points to take a 6-5 lead.  Team Birr tied the game with a single point in the 8th but Team Shuster then blanked the 9th end and scored a point in the 10th for a 7-6 victory and their second title in three years.  Team Shuster will now represent the United States at the World Championships in Edmonton, Alberta. 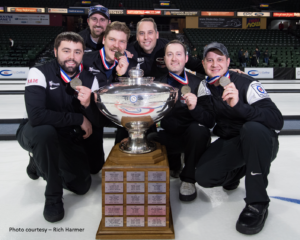 In the women’s event, only three teams would make the playoffs which made getting off to a strong start in the round-robin even more important.  For their part, Team Sinclair started 3-0 and, after losing to Team Roth in the 4th draw, went on to finish 6-1 in the round-robin to finish first and earn a spot in the final.  Team Potter and Team Roth, both form Minnesota, finished 5-2 to qualify for the semi-final.

The semi-final was close until the 4th end when Team Roth scored two points to take a 4-1 lead.  Team Roth then stole one point in the 5th end then stole three more points in the 6th end for an 8-1 victory and a trip to the final for a team that includes three players that won the 2014 Nationals in Philadelphia.

The final started well for Team Sinclair who found themselves leading 4-1 after scoring two points in the 5th end.  Team Roth started the back half of the game by scoring two points of their own and closed the gap to 4-3.   After the two teams exchanged singles in 7th and 8th ends Jamie Sinclair made a difficult draw in the 9th end against three opposition counters to score one point and take a 6-4.  In the 10th end, Team Sinclair ran Team Roth out of rocks to secure a 6-4 win and a first national championship for skip Jamie Sinclair.  For their part, Team Roth will represent the United States at the World Championships despite not winning the U.S. Nationals as they finished first in the qualifying process implemented by USA Curling. 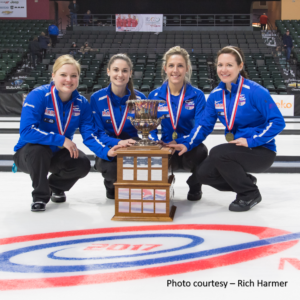 The Swiss Curling Championship took place last week in Flims, which made Team Feltscher, the defending champions, the hometown favourites.  Team Feltscher did not disappoint in the double round-robin as they finished tied atop the standings at 8-2 with Team Paetz meaning that the two teams would meet in the 1 vs 2 game.  Team Tirinzoni and Team Hegner finished tied at 5-5 and played a tie-breaker to see who would advance to the semi-final to play the loser of the 1 vs 2 game.  In the tie-breaker, Team Tirinzoni took a 6-1 lead in the first half of the game and never looked back on their way to a 9-4 victory over Team Hegner.

In the final, Team Paetz stole two points in the 4th end to take a 4-1 lead.  The two teams exchanged deuces in the 5th and 6th ends to make the score 6-3.  Team Feltscher scored one point in the 9th to make the score 7-5 and then stole one point in the 10th but it was too little too late as Team Paetz won 7-6 and will represent Switzerland at the World Championships.  It is a second Swiss Championship for Paetz as a skip.

In the Swiss Men’s Championship, Team de Cruz finished first in the round-robin and would play Team Attinger in the 1 vs 2 game while Team Pfister would play the loser of that game in the semi-final.  Team Attinger was up 2-1 after five ends of the 1 vs 2 game and the game was tied 5-5 heading into the 10th end when Team de Cruz scored one point for a 6-5 victory and a spot in the final.  In the semi-final, Team Attinger scored three-enders in the 4th and 8th ends to take an 8-4 lead then held on for an 8-6 victory over Team Pfister.

The final was tied 2-2 after five ends followed by an exchange of deuces in the 6th and 7th ends to keep the game tied at 4-4.  Team Attinger took a 6-5 lead in the 9th when the scored two points only to watch as Team de Cruz scored three points of their own in the 10th for an 8-6 victory.  Peter de Cruz will represent Switzerland at the World Championships for a second time after first qualifying in 2014.

Four team competed for one final spot in the main draw of the 2017 Scotties tournament of Hearts.  Team Adams of New Brunswick, Team Galusha of the Northwest Territories, Team Chislett of Nunavut and Team Koltun of the Yukon were the four participants in the 2017 Scotties Pre-Qualifier which is in its last year of existence.  Team Galusha were making their third straight appearance in the Pre-Qualifier, having lost in the final the past two years. Nunavut and Yukon were eliminated within 24 hours as they both lost their round-robin games to New Brunswick and the Northwest Territories who would meet in the Pre-Qualifier final.

The Northwest Territories took a 3-1 lead in the Pre-Qualifier final by stealing a point in the 5th end.  The two teams then exchanged singles in the second half of the game with Team Galusha winning 5-3 and qualifying Northwest Territories for the main draw at the 2017 Scotties.  It will be Kerry Galusha’s 12th appearance in the main draw at a Scotties.

The 2017 VoIP Defender World Junior Championships started late last week, spread over 10 days to mimic the Olympic schedule for 2018.  The World Juniors are serving as a test event for the venue that will host the curling competitions at the 2018 Winter Olympics in South Korea.

Canada is looking to defend in the women’s event and were off to a good start after the first weekend of action while Scotland is trying to defend the men’s title but have had a tougher start to this year’s.  A full recap of the 2017 VoIP Defender World Junior Championships will be included in our Week 28 Recap.

The Scottish Curling Championships for both men and women are taking place this week in Perth.  The omen’s event is headlined by Team Muirhead with Team Fleming likely to provide the biggest test.  The men’s event has several contenders including defending champions Team Brewster, Team Murdoch, 2013 World Junior Champion Team Kyle Smith while 2016 World Junior and 2017 Winter Universiade champions Team Mouat should be entering the event in top form.