The Pinty’s Grand slam of Curling was in Port Hawkesbury, Nova Scotia this weekend for the Princess Auto Elite 10, its fifth event of the season. The Elite 10 is a match play event with a purse of $100,000 with no WCT or CTRS points are at stake and the field included eight of the top ten teams in the world including Team Gushue and Team Koe coming off a classic battle in the 2017 Brier final.  It was at last year’s Elite 10 that Team Homan became the first women’s team to participate in a men’s event at a Grand Slam and with Team Homan otherwise occupied at the Women’s World Curling Championship, organizers brought together a group of retired curlers that were referred to as the Elite 10 Select Team.  Jeff Stoughton was joined on the Select Team by David Nedohin, Jamie Korab and Nolan Thiessen in a lineup that collectively won 7 World Championships, 10 Briers, 11 Grand Slam events and one Olympic title.

The Select Team did not disappoint as they defeated Team Laycock, Team Gushue and Team Morris while securing a spot in the quarterfinals where they lost to Team Carruthers while Team Koe, fresh off their loss in the Brier final, won the other quarterfinal over Team de Cruz of Switzerland.

The semi-finals saw Team Morris win the 4th, 5th and 6th ends as they defeated Team Carruthers 4 and 2.  In the other semi-final, Team Koe won the 1st end but then Team Jacobs won four of the next five ends to win the game 3 and 2.

Team Morris and Team Jacobs each won two ends in a final that was at “All Square” entering the 8th end when Jim Cotter made a difficult in-off to win the end and the match “1-Up”.  It is a third title this season for Team Morris and their first Grand Slam victory since Jim Cotter, Tyrel Griffith and Rick Sawatsky won the Tour Challenge tier 2 event at the start of the 2015-16 season. 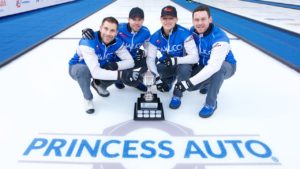 The Aberdeen International Championship was a first-year event that attracted a strong field including Team McEwen of Canada, Team Ulsrud of Norway along with top Scottish teams such as Murdoch, Smith, Brewster and Mouat.

Everything seemed to be going according to form when Team McEwen and Team Murdoch qualified for the playoffs through the A Event.  However, the B and C Events saw a purge of the other top-ranked teams as Ulsrud, Shuster, Pfister, Brewster, Mouat and Smith failed to qualify.

Team McEwen managed to advance to the semi-finals when by defeating Team Kauste of Finland 9-4 but Team Murdoch was not as fortunate as they lost their quarterfinal game to Team Schwaller of Switzerland by a score of 5-2.  McEwen and Schwaller were joined in the semi-finals by Team Hardie of Scotland and Team Liu of China. 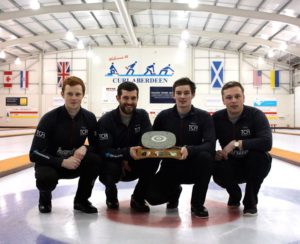 The CPT World Women’s Curling Championship is well under way in Beijing China with six of the top twenty teams in the world on hand battling for the title.  Team Paetz, the 2015 champions, are attempting to win a fifth title in six years for Switzerland while Team Homan, the top-ranked team in the world is attempting to win Canada’s first world championship since 2008 and Team Homan’s first world title after winning a bronze medal in 2013 and a silver medal in 2014.

The U.S. Mixed National Championship is taking place this week in Williston, North Dakota.  The defending champions from Washington, skipped by Fred Maxie, are on hand to defend their title as is last year’s finalists, Greg Persinger and his team representing Alaska. Early on in the championship, Alaska was at the top of standings along with a young team from Minnesota skipped by Hunter Clawson who skipped his junior team to a fourth-place finish at this year’s U.S. Junior Nationals.

The 2017 Everest Canadian Seniors are being held in Fredericton, N.B. this week.  Among the well-known names in the women’s event are 1998 Scotties champion Kathy King of Alberta, Sherry Anderson of Saskatchewan and Team Mattatall of Nova Scotia who also represented the province at the recent Scotties Tournament of Hearts in St. Catharines.  In the men’s even Mike Kennedy, who skipped New Brunswick at the recent Tim Hortons Brier, will play 3rd for Terry Odishaw.  Other names that might be familiar are Mark Newsworthy of NL, Alan O’Leary of NS and Robbie Gordon of NO who have hall played in the Brier in the past.  This year’s winners will represent Canada in the 2018 World Seniors, at a site and date to be announced by the World Curling Federation