The 2017 CPT World Women’s Curling Championship took place in Beijing last week with a field that boasted eight teams ranked in the top 30 in the world.  Top-ranked Team Homan of Canada lived up to their ranking as they managed to go unbeaten in the round-robin, becoming the first team to go undefeated in the round-robin since Team Norberg of Sweden in 2005.

Aside from Canada and Sweden who seemed to be headed towards playoff spots throughout the week, the remaining teams were involved in a battle for the remaining two playoff spots.  Russia earned a place in the 1 vs 2 game by winning their final six games including a win over Sweden which dropped the Swedes into the 3 vs 4 game despite having an identical record to the Russians.  The last playoff spot was secured by Scotland who won their final four games to finish 7-4.  This meant that no tie-breakers were required even though eight teams remained in the playoff picture starting the final day of round-robin action.

The United States finished one game out of the playoffs and will likely point to a loss against Germany as the game that got away from them and could have secured a tiebreaker.  Four teams finished the championship at 5-6 and will head home with different levels of satisfaction or frustration.  The Czech Republic and Germany might be a bit disappointed but surpassed the expectations that many had for them heading into the event.  The Koreans, ranked 15th in the world, were likely hoping for a better finish as they prepare to compete as the home team at the 2018 Olympic Games in Pyeongchang.  Meanwhile Team Paetz of Switzerland, the 2015 World Champions, had a difficult week and failed in their attempts to win a fifth world championship in six years for Switzerland despite a 4-0 start in the round-robin.

The most disappointing result of the week had to be the host Chinese team who were never able to generate much momentum during the week and finished at 2-9.  Much more was expected of Bingyu Wang and her team after a solid season where they are 10th in points on the World Curling Tour year-to-date.  Italy finished at 3-8, an improvement of two wins over last year, while Denmark took a step backwards finishing last in the round-robin with a record of 1-10 after finishing 5-6 last year.

At the end of the round-robin, the World Curling Federation confirmed eight of the 10 countries that will participate in the women’s competition at the 2018 Winter Olympic Games.  Canada, Japan, Russia, Scotland, Sweden, Switzerland, the United States and the host Koreans have all qualified while the final two spots at the Olympics will be filled at a qualifying event in Pilsen (CZE) next December.

To win the 1 vs 2 game at a World Championship you must bring your “A game” and, although shooting percentages in curling can sometimes be misleading, there is little chance that any side would defeat Team Homan of Canada when shooting a combined 73% as Russia did in the 1 vs 2 game.   The result was a 7-3 victory by Canada which earned them a spot in the final.

Sweden defeated Scotland by a score of 8-5 in the 3 vs 4 game.  The turning point in the game was the 8th end when Sweden scored three points to extend what had been a 5-4 lead.  Team Hasselborg of Sweden thus qualified for the semi-final in their first world championship as a team.  The semi-final itself was tied 3-3 after six ends when Russia took control by scoring three points in the 7th and stealing three more points in the 8th for a 9-3 victory.  It was an emotional win for Team Sidorova who had lost in the semi-final at both the 2015 and 2016 world championships.

Scotland overcame a disappointing loss in the 3 vs 4 game to win the bronze medal by defeating Sweden 6-4.  In a game where they stole points in both the 9th and 10th ends to secure the victory.  Eve Muirhead and her team showed much resilience in Beijing.  They overcame a 3-4 start to the round-robin to qualify for the playoffs and overcame a difficult loss in the 3 vs 4 game to defeat Sweden in a rematch for the bronze medal.

Team Homan of Canada had some unfinished business following the end of their 2015-16 season and they certainly took care of that business this year, capped by an 8-3 victory over Russia in the final of the World Women’s Championship.  Canada was up 3-1 at the 5th end break and took full control of the game when they scored three points in the 6th end.  It is a first world title for Team Homan and completes the “podium trifecta” after winning bronze in 2013 and silver in 2014.  The victory in Beijing is also a first world women’s championship victory for Canada since 2008 when Jennifer Jones and her team defeated China in the final 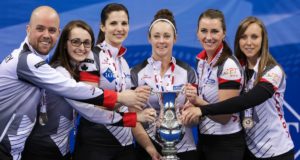 The 2017 Everest Canadian Seniors Curling Championships took place in Fredericton, N.B. last week.  Among the well-known names in the women’s event were 1998 Scotties champion Kathy King of Alberta, Sherry Anderson of Saskatchewan and Team Mattatall of Nova Scotia who also represented the province at the recent Scotties Tournament of Hearts in St. Catharines.  The men’s event included Mike Kennedy, who skipped New Brunswick at the recent Tim Hortons Brier, playing 3rd for Terry Odishaw while former Brier participants such as Mark Newsworthy of Newfoundland & Labrador, Alan O’Leary of Nova Scotia and Robbie Gordon of Northern Ontario were also in the field.

Team New Brunswick dominated the round-robin and the Championship Pool and were undefeated heading into the semi-finals.  The other teams that qualified for the Championship Pool were AB, QC, ON, NO, MB, PEI and NL.  Alberta and Quebec qualified for the playoffs with records of 7-3 while Ontario captured the final spot in the semi-finals with a record of 6-4.

In the semi-finals, Ontario upset New Brunswick when they came from behind by scoring four points in the 7th and stole a point in the 8th end for an 8-5 victory and a trip to the final where they would play Alberta.  Wade White and his team from Edmonton took and 6-1 lead at the 4th end break and never looked back as they defeated Robert Maclean and his team from Quebec by a score of 10-3.

Howard Rajala and his team from Ottawa took a 4-1 lead into the 4th end break in the championship final.   Alberta tied the game when they scored three points in the 6th end followed by an exchange of deuces in the 7th and 8th which forced an extra-end.  Ontario was unable to take advantage of last rock in the extra-end with Alberta stealing a point for a 7-6 victory and the championship.  It was a 9th victory for Alberta in the men’s event since 1965 and a first since 2012.

In the women’s event, there was a three-way tie for first place in the Championship Pool with Alberta, British Columbia and Ontario all finishing 5-2 and qualifying for the semi-finals.  The fourth team to qualify for the semi-finals was Saskatchewan who finished at 4-3 while Nova Scotia, Northern Ontario, Manitoba and New Brunswick failed to advance from the Championship Pool.

Sherry Anderson and her team from Saskatoon took a 6-2 lead in the first half of the semi-final against Cathy King of Edmonton and exchanged single points through the second half of the game for an 8-4 win and a trip to the final.  Meanwhile, Jo-Ann Rizzo and her team from Brantford took control of their semi-final over Cheryl Noble of Qualicum Beach, BC when they scored three points in the 5th end to take 6-2 lead in a game they went on to win by a score of 7-4 to set-up an Ontario vs Saskatchewan final.

Saskatchewan took a 4-1 lead at the 4th end break of the final by stealing single points in both the 3rd and 4th ends.  Ontario narrowed the gap to 4-3 in the 5th and then forced Saskatchewan to one in the 6th.  The turning point of the final came in the 7th end when Saskatchewan stole two points to take a 7-3 lead and ran Ontario out of rocks in the 8th end to win the championship.  It was a 7th title in the women’s event for Saskatchewan and the first since Nancy Kerr and her team won in 2003. 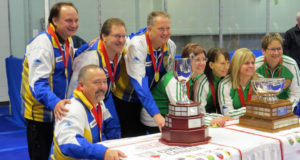 The U.S. Mixed National Championship took place last week in Williston, North Dakota.  The defending champions from Washington, skipped by Fred Maxie, were on hand to defend their title as was last year’s finalists, Greg Persinger and his team representing Alaska. Both Washington and Alaska qualified for the semi-finals where they were joined by Team Schally of Wisconsin and a young team from Minnesota skipped by Hunter Clawson.

A rematch of last year’s final occurred in the semi-final with Alaska exacting some revenge by stealing single points in the 4th and 5th ends on their way to a 4-1 victory over the defending champions from Washington.  In the other semi-final, Minnesota won 8-0 in four ends without ever having last rock.  They stole single points in the 1st and 2nd ends followed by a steal of two in the 3rd and a steal of four in the 4th end. 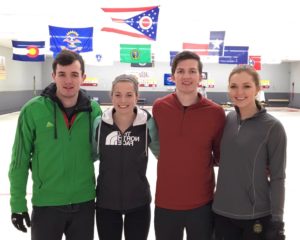 There were two Mixed Doubles events that took place this past weekend.  In the semi-finals at the International Mixed Doubles Dumfries in Scotland, Camilla and Per Noreen of Sweden defeated Scotland’s Judith and Lee McLeary 6-5 while Irantzu Garcia and Gontzal Garcia Vez of Spain defeated Anastasia Bryzgalova and Alexander Krushilnitsky of Russia by a score of 8-6.  In the final, Noreen/Noreen took a 5-2 lead when they scored four points in the 4th end then held on in the 2nd half of the game to win 7-5.

There was a Canadian Olympic Trials spot up for grabs at the Brantford Mixed Doubles Classic in Brantford, ON.  In one semi-final, former Canadian champions Kalynn Virtue and Charley Thomas stole three points over the final two ends to defeat Shannon Birchard and Jason Gunnlaugson by a score of 7-6.  The other semi-final saw Ashley Groff and Kyle Doering defeat Danielle Inglis and Mike Anderson by a score of 5-3.  In the final, Virtue/Thomas took a 7-4 lead into the 8th end but Groff/Doering scored three points to force an extra-end.  Virtue/Thomas, who finished 4th at the 2015 World Mixed Doubles Championship, took advantage of last rock in the extra-end to win 7-6 and earn a spot at the Olympic Trials. 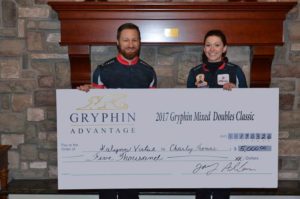 The biggest event on the curling schedule this week is the City of Perth Ladies International in Scotland that has attracted several top European teams along with several Canadian teams that are looking to earn important ranking points in the race for the Canadian Olympic Trials and Pre-Trials.  Canada will be represented by Team Carey of Alberta along with Team Flaxey, Team Fleury, Team Middaugh and Team Tippin of Ontario.  American champions Team Sinclair will be participating as will Team Feltscher and Team Tirinzoni of Switzerland, 2017 World Junior Champions Team Wrana of Sweden and hometown favourites, Team Muirhead.