The Canadian Mixed Doubles Curling Championship take place this week in Saskatoon, Saskatchewan.  Among the favourites to reach the playoffs, and perhaps win the event, are 2015 champions Kalynn Virtue and Charley Thomas who recently secured their place in next year’s Olympic Trials with a victory at an event in Brantford, ON. 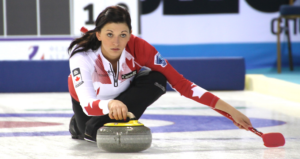 From the Hack caught up with Kalynn Virtue to discuss this week’s Canadian Championship and how mixed doubles curling has changed since it was added to the Olympic schedule.