The Ford World Men’s Curling Championship took place in Edmonton Alberta last week with teams from twelve countries competing for the title.  Canada (Team Gushue) and Sweden (Team Edin) came into the event as the favourites but several other teams had the talent to cause a surprise along the way.  Among the other teams in Edmonton were two-time champions Team Murdoch of Scotland, Team Shuster of the United States who won a bronze medal at last year’s world championship and Team de Cruz of Switzerland who won a bronze at the 2014 World Championship in Beijing.

As many expected, Canada finished atop the round-robin standings while going undefeated.  They were joined in the playoffs by Sweden at 9-2 while Switzerland and the United States filled-out the playoff bracket with records of 8-3.  The standings were very tight throughout the week behind CAN, SWE and SUI with the Americans taking the final playoff spot by winning their final six round-robin games.

The biggest surprise of the week was Italy who were 4-7, good enough for 9th place in the standings which was the best finish by an Italian men’s team at the World Championship since 1996.  Norway was one of the teams that many were watching because the Norwegians were represented by Team Walstad this year and not by Team Ulsrud.  Steffen Walstad and his team showed a lot of promise at their first World Championship while finishing 5-6.

The biggest sub-plot at this year’s World Championship was the race to see which 7 countries would earn direct entry into the 2018 Olympic Games.  Great Britain (Scotland), the defending Olympic bronze medalists, were at risk of falling outside of the top-seven until a late surge in the round-robin allowed Team Murdoch to qualify their country for Pyeongchang.  Great Britain will join Canada, the USA, Sweden, Switzerland, Japan, Norway and the host Koreans at the Olympics in Pyeongchang.  They will be joined by two teams that will qualify at the WCF Olympic Qualifier Event that will take place in Pilsen, Czech Republic next December.  Denmark, China, Finland, Italy, Germany, Russia and the Netherlands will be the seven countries competing for those two final Olympic spots.

Canada had shown the best form throughout the week but, in the 1 vs 2 game, Team Gushue would meet Team Edin of Sweden, the one team in the world that has had a better season than the team from St. John’s, Newfoundland.  The first half of the game came down to a battle of the skips that was won by Brad Gushue which led to steals in the 2nd and 3rd ends for a 3-1 lead at the 5th end break.  Canada then took control of the game in the 7th end when a freeze by Sweden on their last rock over-curled slightly allowing Gushue to convert on a hit for three points and a 6-2 lead.  Sweden narrowed the gap to 7-4 through 9 ends but were run out of rocks in the 10th end.

Team de Cruz of Switzerland came into the 3 vs 4 game having defeated Team Shuster of the United States both times they had met this season including a 7-4 victory in the round-robin.  For their part, the Americans entered the 3 vs 4 game on a six-game winning streak.  The Swiss took a 6-3 lead into the 5th end break, having scored deuces in the 1st, 3rd and 4th ends and extended the lead to 8-3 with another deuce in the 6th.  The U.S. was forced to one point in the 7th and shook hands after the Swiss scored three points in the 8th for an 11-4 victory.  The American back-end of John Shuster and Tyler George, who both played very well late in the round-robin, were simply out-played by their Swiss counterparts in this particular game.

The semi-final was a tightly contested game that saw Sweden take a 3-2 lead into the 5th end break.  In a sign of great shot-making to come, Benoit Schwarz made a triple takeout in the 2nd end that forced Sweden to one and kept the game close in the early going.  The Swiss tied the score in the 6th end but Niklas Edin made a difficult double raise takeout in the 7th end to take a 5-3 lead.  Edin’s shot followed a draw to the four-foot by Schwarz against four Swedish rocks that helped minimize what could have been a big end for Sweden.  After being forced to one in the 8th, the Swiss were down 5-4 but looked to have Sweden on the ropes in the 9th until a triple takeout by Oskar Eriksson helped Sweden blank the end and keep the hammer coming home. In the 10th end, Niklas Edin just missed a hit and roll against two counters that allowed the Swiss to steal a point and send the game to an extra end where, this time, Edin made the hit to score one point and propel Sweden into the final.

In the bronze medal game, The United States took a 3-2 lead into the 5th end break having taken the lead by stealing a point in the 4th end.  The game was a defensive struggle until the 7th end when the United States missed a late shot that allowed the Swiss to score four points and take a 6-3 lead.  The two teams took turns forcing each other to single points the rest of the way ending in a 7-5 victory and a bronze medal for the Swiss.  It was the first podium finish for Switzerland since Team de Cruz won the bronze in 2014 and this year marked the 25th anniversary of Markus Eggler and his team winning Switzerland’s last gold medal at the World Championship.

The final was the equivalent of a chess match on ice with both Canada and Sweden playing at a high level from the outset.  The teams each forced the other to a pair of single points in the first half of the game and the score was tied 2-2 at the 5th end break.  The two teams then blanked the 6th, 7th and 8th ends while both making pressure-filled shots.  In the 9th end, Niklas Edin’s last rock ran straighter than anticipated which allowed Brad Gushue to draw for the first deuce of the game and a 4-2 lead.  In the 10th end, Gushue made a double takeout with his first rock that left Canada lying three and was left with a simple takeout with his last rock for a 4-2 victory.  It was a first World Championship victory for Team Gushue who went undefeated in defending the title won for Canada last year by Team Koe. 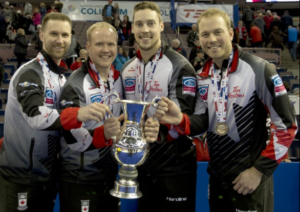 The 2017 Canadian Mixed Doubles Curling Championship took place in Saskatoon on the weekend and several of Canada’s top curlers were on hand to compete for the national title, a trip to the World Mixed Doubles Championship and a spot in next year’s Olympic Trials.  Reigning champions Jocelyn Peterman and Brett Gallant, along with 2016 finalists Laura Crocker and Geoff Walker, were not in Saskatoon to defend their title as both Gallant and Walker were playing in the Ford World Men’s Championship in Edmonton.

Thirty-two teams, seeded and divided into four Pools, played a round-robin within their pool. The pool winners plus the next best eight teams based on win/loss records regardless of pool then advanced to the championship round.  The four top-seeded teams based on Curling Canada’s point system were:  Rachel Homan/John Morris, Jennifer Jones/Brent Laing, Nancy Martin/Caitlin Schneider and Joanne Courtney/Reid Carruthers.

The round-robin was an exciting one with most of the top-ranked teams qualifying for the playoffs. The only top-seeded team not to qualify was the team of Nancy Martin/Caitlin Schneider.  The four teams that qualified directly for the quarterfinals were; Homan/Morris, Jones/Laing, Courtney/Carruthers and Sherry Just/Ryan Deis of Saskatchewan.   In an interesting side note, there were three members of Team Homan in Saskatoon and they went a combined 19-2 in the round-robin.

The only major upset in the Round of 12 was the team of Janet Murphy/Hugh Murphy, who had to win two tie-breakers to reach the Round of 12, defeating 2015 Canadian champions Kalynn Virtue/Charley Thomas who had secured a spot in next year’s Olympic Trials with a win in an event two weeks ago. In the other Round of 12 match-ups; Kasner/Kalthoff def. Birchard/Gunnlaugson (7-5), Carey/Hodgson def. Baxter/Dacey (6-5) and Ferguson/Bottcher def. Weagle/Epping (7-3).

The quarterfinals were the end of the line for all but one of the teams that played in the Round of 12.  The team of Carey/Hodgson were the only exception as they won their 8th game in a row by defeating Just/Deis.  In other quarterfinal games, Homan/Morris def. Kasner/Kalthoff (8-6), Jones/Laing def. Murphy/Murphy (9-4) and Courtney/Carruthers def. Ferguson/Bottcher (7-4).

Because of their records in the round-robin, the top two seeds entering the championship faced each other in the semi-final round.  The two teams were tied 3-3 when Homan/Morris scored two in the 4th end to take a 5-3 lead at the break.  The second half of the game was low-scoring with Homan/Morris taking control when they stole two points for an 8-4 lead in the 7th end  then ran Jones/Laing out of rocks in the 8th end for an 8-4 victory.   In the other semi-final, Courtney/Carruthers stole single points in the 3rd, 4th and 5th ends to take a 4-1 lead over Carey/Hodgson.  The two teams exchanged deuces in the 6th and 7th then Courtney/Carruthers forced their opponents to a single point in the 8th to secure a spot in the final.

In the final, Courtney/Carruthers had a 3-2 lead at the 4th end break.  The teams exchanged the lead in the 6th and 7th ends when Homan/Morris scored three to take a 5-4 lead and Courtney/Carruthers responded with two points of their own.  Homan/Morris had the hammer in the 8th end and had a draw to win the championship but they missed by “this much” and had to settle for a single point to send the game into an extra-end.  Courtney/Carruthers took advantage of the hammer in the extra-end to score three points and win the Canadian Mixed Doubles Championship.  They will represent Canada at the 2017 World Mixed Doubles Championship, April 22-29 in Lethbridge, Alberta.  The World Championship will decide the seven countries that join host South Korea in the mixed doubles event in Pyeongchang.  Canada is currently ranked 5th in the WCF Mixed Doubles rankings and will need a strong performance in Lethbridge to secure an invitation to the Winter Olympics. 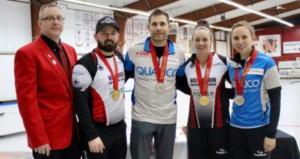 The top 12 men’s and women’s teams of the season are headed to Toronto to participate in the Pinty’s Grand Slam of Curling’s WestJet Players’ Championship.  Team Muirhead, who have won the Players’ three of the past four seasons, will be on hand to defend their title but will likely face stiff competition from the likes of Team Homan fresh off their victory at the World Championship and Team Hasselborg among others.  Team Fleury enters the event with the extra incentive of knowing that a title in Toronto would also secure a spot in the Olympic Trials.  If Team Fleury fails to win the event, they will be doing a lot of scoreboard watching as there are a couple of scenarios through which they can qualify directly for the Trials ahead of Team Carey who did not qualify for the Players.

In the men’s event, Team Gushue will look to follow up their victory at the Brier and Worlds by defending their title at the Players’.  Not unlike Team Fleury in the women’s event, Team Laycock and Team Morris will engage in a “competition within the competition” as it is still mathematically possible for Team Morris to catch Team Laycock for the 7th and final direct entry into the Canadian Olympic Trials.

If winning the Players’ Championship was not motivation enough, there are several teams in both the men’s and women’s events still in the running for the Rogers Cup that goes to the teams that have performed the best throughout this year’s Grand Slams.  The winners of the Rogers Cup will also receive a $100,000 bonus.