It was an important weekend for several of the world’s top teams as they converged on Toronto for the Pinty’s Grand Slam of Curling’s 2017 WestJet Players’ Championship.  At stake was not only the most prestigious of the Grand Slam titles but also the Rogers Grand Slam Cup and, most importantly this season, the Players’ was the last event where Canadian teams could score points in the race to qualify for the Olympic Trials with the final direct spot in both the men’s and women’s Trials still undecided.

In the men’s event, the battle for the final direct entry into the Olympic Trials took an interesting turn when Team Laycock lost in a tie-breaker against Team Carruthers but Team Morris was not able to take advantage of the opening when they also lost to Team Carruthers in a tie-breaker. These results meant that Team Laycock earned the final direct sentry into the Trials.

In the quarterfinals, Team McEwen defeated Team Carruthers 4-2 in the “Battle of Manitoba”, Team Gushue continued its string of recent successes against Team Koe with 6-1 victory, the 2015 Players’ champion Team Jacobs lost to Team Kyle Smith of Scotland 7-6 and Team Edin defeated Team de Cruz 4-3 in a game where the Swedes curled 93% as a team.  With the defeat of Team Jacobs in the QF, the only two teams left in the race for the Rogers Grand Slam Cup were Team Edin and Team Gushue.

As one might expect, the semi-final between Team Gushue and Team McEwen was a highly competitive game with Team Gushue taking a 2-1 lead into the 4th end break.  After a blank in the 5th end, the offence picked up as the teams exchanged deuces the rest of the way with Team McEwen coming out on top with a 5-4 victory.  In the other semi-final, Team Edin stole two points in the 5th end to take a 4-1 lead over Team Smith and the young Scottish team was never able to recover as the Swedes went on to win 6-2.  The victory by Team Edin and the loss by Team Gushue meant that the Swedes clinched the Rogers Grand Slam Cup. 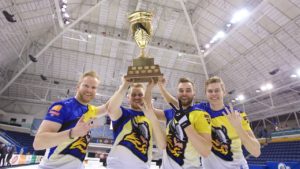 In the women’s event, Team Muirhead of Scotland was attempting to win the Players’ for the fourth time in five years, all at the Mattamy Athletic Centre in Toronto.   Among the sub-plots, half the competing teams were still in the running for the Rogers Grand Slam Cup and the final direct entry in the Olympic Trials was still to be decided.  The final direct entry in the Olympic Trials came down to Team Fleury having to win the Players’ or get a lot of help from other teams to qualify ahead of Team Carey, who weren’t event at the Players’ Championship.

Team Hasselborg of Sweden won their quarterfinal against Team Fleury 6-5 after defeating Team Flaxey in the only tie-breaker.  In the other quarterfinals, Team Sweeting beat Team Homan 4-3 in an extra end, Team Tirinzoni defeated Team Scheidegger 7-3 in a rematch of the final from the Canadian Open and, in a battle of the two most successful teams in the history of the Players’ Championship, Team Jones defeated Team Muirhead 6-5.

In their semi-final, Team Hasselborg was behind 3-1 at the 4th end break but scored four points in the 5th end to take a 5-3 lead against Team Sweeting.  However, that would be the only offense that the Swedes would be able to generate in the second half of the game as Team Sweeting scored two points in the 6th and then stole the winning point in the 8th end for a 6-5 victory that also secured enough points for Team Sweeting to win the Rogers Grand Slam Cup and the $75,000.00 bonus.  Meanwhile, in the other semi-final, Team Jones took control of what had been a tight game when they scored four points in the 7th end of their 8-3 victory over Team Tirinzoni.

By this point in the event, the drama over which team would secure the final direct entry into the Olympic Trials had been settled with Team Carey headed to the Trials and Team Fleury headed to the Pre-Trials.

The final was a back and forth type of game with each team taking turns scoring multiple points early with Team Jones having a 5-3 lead at the 4th end break.  Team Sweeting managed to steal a point in the 5th end but it would be the last point they would score.  Team Jones scored a deuce in the 6th, stole a point in the 7th and then ran Team Sweeting out of rocks in the 8th end for an 8-4 victory.  It was a 6th Players’ Championship for Team Jones who also took home a $40,000.00 bonus for finishing second in Rogers Grand Slam Cup standings.  Team Tirinzoni finished third in the standings for a $25,000.00 bonus and Team Hasselborg finished fourth and won an extra $10,000.00. 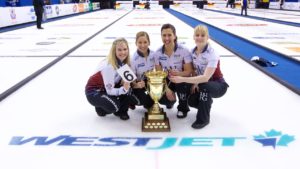 The World Mixed Doubles Championship will start next weekend in Lethbridge, Alberta with a lot at stake in this pre-Olympic year as it will be the final event where teams can earn points for their country to qualify for the Olympic mixed doubles competition.  The Canadian pair of Reid Carruthers and Joanne Courtney will be among the favourites along with defending champions Anastasia Bryzgalova and Alexander Krushelnitskyi of Russia, Rui Wang and Dexin Ba of China, Camilla and Per Noreen of Sweden, Gina Aitken and Bruce Mouat of Scotland, Jenny Perret and Martin Rios of Switzerland and the American bother/sister pair of Matt and Rebecca Hamilton.

It will be interesting to see if the experience of teams such as Russia, Sweden, Switzerland and China, who have all played numerous mixed doubles events this season, will be an advantage when playing countries such as Canada and the United States that will be represented by elite curlers from the World Curling Tour that have limited mixed doubles experience.

The World Senior Curling Championships will also be hosted in Lethbridge starting next weekend.  Among the well known players taking part in the women’s event are Colleen Jones, Kim Kelly and Nancy Delahunt of Canada who won five Scotties and two World Championships together in the early 2000’s, Jackie Lockhart who skipped the 2002 world champions from Scotland and who also won the World Seniors Championship last year while five-time U.S. champion Patti Lank will also be on hand in Lethbridge.  Some of the notable names in the men’s event are Team Wrana of Sweden who won the championship last year and Bryan Cochrane of Canada who represented Ontario at the Brier in 2003.

The Euronics European Masters will take place in St. Gallen Switzerland on the weekend with a strong men’s field that includes Team Edin, Team Ulsrud and the Scottish triumvirate of Team Smith, Team Brewster and Team Murdoch while the women’s event will be headlined by Team Paetz of Switzerland, Team Fleming of Scotland and Team Kubeskova of the Czech Republic who finished fourth at this season’s European Championship and seventh at the recent World Championships in Beijing.