The 2016-17 curling season ended with a bang this week with a handful of major events including three world championships and the final Grand Slam of Curling event of the season.

The most pressure-filled of the events was the World Mixed Doubles Championship taking place in Lethbridge, Alberta where results would help determine which countries would participate in the 2018 Winter Olympics in Pyeongchang, South Korea where mixed doubles will be making it’s first appearance on the Olympic schedule.  There were 39 countries involved in this year’s World Mixed Doubles Championship with both finalists from 2016, Bryzgalova/Krushelnitskiy of Russia and Wang/Ba of China back this year to represent their countries.  The United States, winners of the bronze medal last year, were represented by the sister/brother team of Tabitha and Matt Hamilton.

Switzerland and Sweden, two of the more successful countries at the World Mixed Doubles Championships in the past, looked to re-assert themselves after both failing to qualify for the playoffs last year while Scotland, a traditional curling power, was looking for its first-ever podium finish in mixed doubles after finishing fourth last year.  The World Mixed Doubles Championships often sees unexpected results from non-traditional curling countries such as Hungary winning 2013 and 2015, Spain winning a bronze medal in 2014 and Austria winning bronze in 2012.  Among the countries that would surprise this year were the Czech Republic and Latvia.

Canada, the host country, was represented by Joanne Courtney and Reid Carruthers who both play on high-ranked teams on the World Curling Tour.   Courtney was looking to become the first player to win World Championships in both four-person and mixed doubles in the same season after winning the 2017 World Women’s Championship with Team Homan.  For his part, Carruthers is the skip of the 4th ranked team in the world, winner of the 2016 Canada Cup and he won the 2011 World Men’s Championship while playing second for Jeff Stoughton who served as coach for Courtney and Carruthers during the event.

The round-robin portion of the Championship ended with Latvia, Scotland, Korea, the United States and Switzerland each going undefeated.  They were joined in the Round of 16 by Norway, China, the Czech Republic and Russia who each had one loss while Hungary, Finland, Italy, Sweden, Canada and Spain qualified with two losses.  The only country that made the playoffs with three losses was Ireland.  The Round of 16 was unkind to two of the unbeaten teams as Scotland was defeated by Canada and the United States was defeated by Finland.

In the quarter-finals, China defeated Korea (8-2), Canada beat Latvia (10-6), Switzerland doubled Norway (8-4) and the Czech Republic came from behind to defeat Finland (6-5).

Canada faced China in one semi-final with neither team able to score more than one point in any end.  China tied the game 4-4 when they stole one point in the 8th end only to see Canada come back in the extra-end to score a point of their own for a 5-4 victory.  In the other semi-final, the Czech Republic was up 4-3 at the 4th end break but Switzerland scored points in three of the four ends in the second half of the game, including a single point in the 8th end, to win the game 7-6.

The bronze medal game saw China defeat the Czech Republic 6-2 in a game where the Chinese pair out-curled their Czech opponents 89% to 71%.  The Chinese stole two points during the game and scored the only deuce of the game in the 6th end.

In the final Canada played a very solid mixed doubles game, including three stolen points, and took a 5-2 lead into the 8th end where Canada needed a tap-back on their final rock that would have made it difficult for the Swiss to score more than two points.  However, their final stone did not curl as much as Canada expected, hit the target rock too thin and gave Switzerland an open hit for four that Jenny Perret executed brilliantly.  It was a 6th victory for Switzerland at the World Mixed Doubles Championship and the second-place finish was a best-ever result for Canada in the event.

The eight countries that qualified for the 2018 Winter Olympics in Pyeongchang are: China, Canada, Russia, Switzerland, the United States, Finland and the host Koreans.  Points for Olympic qualification were tallied at both the 2016 and 2017 World Championships.

The City of Lethbridge also hosted the World Senior Curling Championships for both men and women last week.  The event consisted of 23 men’s teams and 15 women’s teams.

The Swedish men got off to a good start, joining Canada as one of only two teams to go undefeated in the round-robin.  The Swedes and Canadians were joined in the quarter-finals by Denmark, Ireland, New Zealand, Australia, Germany and Wales who defeated Israel in a tie-breaker for the final playoff spot.

In the quarter-finals, Canada defeated Wales (8-1), Ireland edged Denmark (5-4), Sweden got past New Zealand (5-4) by stealing the winning point in the 8th end while Germany beat Australia (10-4).

In the bronze medal game, Peter Wilson and his team from Ireland won their second consecutive bronze medal at the World Senior Curling Championship by stealing three points on their way to a 6-3 victory over Germany.

In the final, Sweden took a 3-0 lead before Canada scored two points in the 6th end to close the gap to 3-2.  The Swedes then took a 4-2 lead in the 7th end before Canada tied it with another deuce in the 8th.  In the extra-end, Sweden took advantage of last rock to score a point for a 5-4 victory and their second consecutive World Senior Curling Championship. 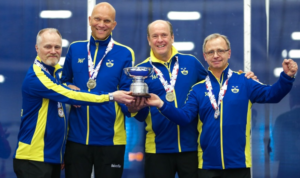 In the women’s event, the only team to go undefeated in the round-robin was Canada. The Canadian team included Colleen Jones, Kim Kelly and Nancy Delahunt who won two Women’s World Championships and five Canadian Championships between 1999 and 2004 along with Mary Sue Radford who occasionally served as 5th for the team during that period.  The Canadians won a direct spot in the semi-finals along with the United States.  They were joined in the semi-finals by Switzerland who defeated Italy 7-3 in one qualification game and Scotland who defeated Russia 10-0 in the other qualification game.

In one semi-final, Canada defeated the defending champions from Scotland 5-3 scoring two points in the 8th end for the victory.  In the other semi-final, the United States came back from 5-1 down to tie the game when they scored three points in the 7th end then stole the tying point in the 8th end.  The Swiss then scored three points with last rock in the extra end for an 8-5 victory.

In the bronze medal game, Scotland seemed to take control when they scored four points in the 5th end to take a 6-2 lead.  However, the U.S. came back with three points of their own in the 6th end to make the score 6-5.  Scotland was forced to one point in the 7th end but were then able to steal a point in the 8th end to secure an 8-5 victory and earn Jackie Lockhart and her team a podium finish for the second consecutive year after winning gold last year.

Switzerland, skipped by Cristina Lestander, took an early lead in the final when they stole a point in the 1st end only to see Canada take control of the game by scoring three points in the 2nd end then stealing three more points in the 3rd end.  The Swiss pulled back within two when they scored three of their own in the 4th end but Canada responded with another three points in the 5th end to take a 9-4 lead on their way to a 10-5 victory and the 11th World Senior Women’s Championship in the 16 years that the event has been held. 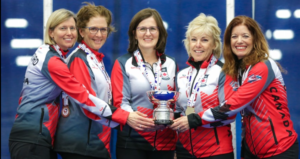 The final event of this season’s Pinty’s Grand Slam of Curling took place this weekend in Calgary where many of the world’s top curling teams competed in the Humpty’s Champions Cup where Team Jones were looking to defend their title while Team Carruthers was also looking to defend their title but they would have to do so without Reid Carruthers who was representing Canada at the World Mixed Doubles Curling Championship.

Team Gushue was the only team to finish the men’s round-robin undefeated and were joined in the quarter-finals by Team Morris, Team Koe, Team de Cruz, Team Jacobs and Team McEwen.  They were joined by Team Epping who defeated Team Shuster in one tie-breaker while Team Edin defeated Team Laycock in the other tie-breaker.

In the quarter-finals, Team Edin defeated Team Gushue (8-5) by scoring four points in the 8th end, Team Koe beat Team Morris (7-3), Team Epping scored three-enders in consecutive ends late in their game against Team de Cruz to win (8-3) while Team Jacobs scored five points in the 5th end but had to score a single point in the 8th end to defeat Team McEwen (9-8).

The key moment of the final between Team Jacobs and Team Koe came in the 5th end when Kevin Koe attempted a raise take-out for multiple points but gave up a steal of one that gave Team Jacobs a 5-2 lead.  The 2010 Olympic champions stole another point in the 7th end for a 6-2 victory and their second Grand Slam title of the season.

In the women’s event, Team Paetz of Switzerland was the only team to go undefeated in the round-robin and were joined in the playoffs by Team Jones, Team Homan, Team Tirinzoni, Team Harrison, Team Sweeting, Team Hasselborg and Team Sinclair of the United States who defeated Team Einarson in a tie-breaker.

The quarter-finals saw a battle of the two top-ranked women’s teams in the world as Team Homan defeated Team Jones (9-5), Team Paetz score a point in the 8th to defeat Team Sinclair (5-4), Team Harrison scored five points in the 6th end of their (9-5) victory over Team Tirinzoni and Team Hasselborg defeated Team Sweeting (5-4).

In one semi-final, Team Homan stole single points in four consecutive ends in their 5-0 defeat of Team Paetz while in the other semi-final, Team Hasselborg stole three points in the second end to take a 4-0 lead and never looked back as they defeated Team Harrison, winners of this season’s Tour Challenge Tier 2 event, by a score of 7-2.

Team Hasselborg, in their first Grand Slam final after making the semi-finals in four other Grand Slam events this season, took a 2-1 lead into the 4th end break against Team Homan.  The 2017 World Champions took a 3-2 lead when they stole a point in the 6th end but Team Hasselborg responded immediately by scoring two points in the 7th end to take a 4-3 lead.  Team Homan then scored two points with the hammer in the 8th end for a 5-4 victory, their sixth event title of the season and their first Grand Slam title of 2016-17.  Team Homan played with Sarah Wilkes at second during the Humpty’s Champions Cup as Joanne Courtney was at the World Mixed Doubles Championship where she won a silver medal with Reid Carruthers. 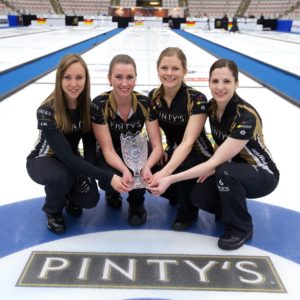 This is the final weekly recap of the 2016-17 season.  From the Hack will publish a monthly report during the off-season to keep our audience informed of news and developments from the world of curling.

We would like to thank everyone who has taken the time to read our weekly recaps throughout the season and look forward to being back in August to start covering the 2017-18 curling season.